In last week’s blog post Paul Keeble wrote about encountering UTU via the Urban Theology Collective at Gladstone’s library. This week our contributor Greg Smith, shares his journey including the collaborative writing of ‘Faithfulness in the City’ a piece of work which came out of a writing fortnight with the collective.

Dipping into UTU over 40 years 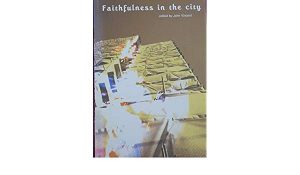 It must have been in 1976 that I first connected with the Urban Theology Unit and John Vincent  when I signed up for a course delivered at the Barking College of Technology. Above all I remember it as the first time I met with some interesting people such as Terry Drummond, Tony Holden, and Vaughan Jones all of whom later turned out to be urban mission  legends. We started to learn some of the basics of how to analyse communities and plan appropriate ministry within them. Some of us took on a contextual analysis of East Ham and Manor Park, examining the detailed tables in the 1971 census, mapping the assets of the area on large sheets of paper, and wandering up and down the High Street trying to read the signs and Street and talking to people about their experience of living there. It was the time of change, with the growing settlement of South Asian communities, shrinking congregations in churches with oversized buildings, and the redevelopment or handover of some of them for use by the newer communities for religious and social purposes.

I have to say I didn’t really know what to make of John Vincent – and I guess that still applies today. There was always the Bible and Jesus in the midst of it, and especially Mark’s gospel but it didn’t really fit into what was then my neatly systemised evangelical theology. Now many years older, possibly wiser, and certainly more open to diversity of interpretation of the gospel I am more appreciative of how a complex jigsaw of Christianity fits together in the urban world.

Over the years, 26 of them in Newham in East London, and now another 17 in Preston, I continued to dip in and out of the work of UTU. Now I am about to retire from a jumbled up career in urban ministry, community work and academic research – though I’m clear there’s going to be no retirement as an urban disciple of Jesus. And UTU and the networks and friendships I acquired through it, and a range of other organisations, continue to give inspiration and solidarity in the work of the Kingdom.  In the late 1980s following the Faith in the City report I worked for ECUM (the Evangelical Coalition for Urban Mission) and travelled the country aiming to discover and encourage churches, projects, and individuals working in what were euphemistically described as urban priority areas..Of course they rarely if ever were made anybody’s priority.

In the 1990s I took part and several UTU gatherings and conferences in Sheffield, mostly exploring the theme of British liberation theology with folks like Laurie Green and Colin Marchant and Mike Eastman. Urban ministry in the UK was becoming broadly ecumenical. It was a time of some hope, with emerging initiatives in broad based community organizing and huge amounts of money being poured into inner city regeneration projects across the country. Sadly most of them didn’t make much difference for local people, with the financial crash of 2008 and the subsequent age of austerity.

Around 2002 John invited a group for a couple of writing weeks at St. Deniols Library. Out of that can the volume “Faithfulness in the City”, to which I contributed my chapter “the Christ of the Barking Road”. It was immensely stimulating to be able to reflect together and the very diverse volume we produced is worth rereading.

A few years ago I took on some evaluation work of some projects in Sheffield and it was good to reconnect with UTU and the projects it had spawned in Burngreave and Pitsmoor. The value of a faithful long-term presence in and alongside some of the most marginalised communities in the country was more than evident.

So thank you UTU, thank you John Vincent and your colleagues for  the inspirational thinking.