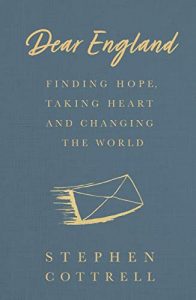 For those who enjoyed Rowan Williams’s Tokens of Trust: An Introduction to Christian Belief,[2] you will find much to like about this offering from Stephen Cottrell, the newly appointed Archbishop of York. As with Rowan’s book, Stephen’s has been written by a liberal Anglo-Catholic to convey something of what it means to be an orthodox Christian to those who may know little about the Christian faith but are curious to know more. It was never going to be an easy task; yet he pulls it off with aplomb, in part due to the accessibility of his prose style and the ease with which he handles anecdotal recollections.

For Stephen, Christian faith is about finding hope, often in a world where there is little evidence of it and – for some – little apparent justification for it. He ascribes these feelings of negativity about any sense of ultimate purpose to one’s life as – in part – symptomatic of the choice culture in which we now live: ‘a choice culture, where the choice extends to all realms of life… For most of us, there is simply no such thing as an absolute truth: you have your truth, I have mine.’ Not only does this ‘postmodern’, cultural relativism have intellectual limitations for Stephen; it can also be psychologically retarding to those who seek a more solid moral foundation on which to call, and who yearn for a deeper – more intellectually nuanced – take on the meaning of life and how to live it, that the Christian tradition offers.

Being a Christian, for Stephen, is also about changing the world, and his indebtedness to the emphasis that liberal Anglo-Catholicism places on incarnational theology as a route to advancing social justice is apparent, though not explicitly stated. At a time when any notion of the common good is being questioned by some Anglo-Catholic theologians as being inconsistent with a pluralist vision of society,[3] Stephen embraces it: ‘My own good can only be secured by securing the common good of all.’ In this regard – as well as in others – it is clear that he has been influenced by Roman Catholic Social Teaching (he has been a member of the Anglican Society of Catholic Priests for many years) to which he makes reference in the closing chapter, sharing a common understanding with Roman Catholics of the importance of the dignity of labour, the universal distribution of goods, and of solidarity –that is, ‘reminding us that we belong to one another irrespective of ethnicity, language, religion, education or status.

At a time when theology is often seen as inaccessible to laypeople owing to the impenetrable style in which it is often written, Stephen, in this book, shows that it needn’t be that way. He covers an enormous amount of ground in a modest number of words that convey the essence of his orthodox Christian faith in ways that are fully accessible and comprehensible. As with Rowan Williams, his is a faith perspective from within the Affirming Catholicism grouping that is deeply held and admirably informed. If he can demonstrate the same accessible writing skills that he shows in this book when composing his sermons for York Minster, he might just make a not inconsiderable contribution to stemming the tide of disaffiliation and reduced observance that has plagued the Church of England since the early 1960s!