Happy 2019. This is the year that we celebrate 50 years of UTU and invite guest blog posts from all that have been influenced by our work over the years. We are delighted to introduce this series with Christopher Rowland’s contribution. If you would like to share your own story please email office@utusheffield.org.uk, we look forward to hearing from you. 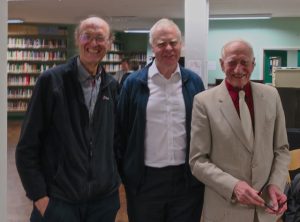 It was in the aftermath of a life-changing visit to Brazil in 1983 that I came back to England determined to find a way to emulate the relationship between my everyday job as a biblical theologian and everyday life such as I had witnessed going on in the basic communities in the shanty towns on the periphery of mammoth cities like São Paulo.

John Vincent and the Urban Theology Unit had been mentioned to me. My first visit to Sheffield led to many more visits, several bringing groups of students from Cambridge, who themselves continued to have a relationship with UTU.

I shall not forget the first visit I made bringing the students, I think in 1985. During one of the sessions Ed Kessler contrasted the UTU core group with the Cambridge group, as the former being ‘disciples’ the latter being ‘saints’. It struck me as a contemporary way of exemplifying what a New Testament interpreter like Gerd Theissen had written about the contrast between the lives of the first disciples of Jesus and the communities of the Pauline mission!

My times at UTU were always a learning experience for me, just as  had been the time in Brazil, and it informed and enriched my work as a biblical scholar at first in Cambridge and then Oxford. In Brazil I  saw biblical scholars working with and enabling people to understand life by means of the Bible, to quote a phrase of one of the people I met, and, just as important, learning from ordinary people the meaning of the biblical text. So it was not a matter of coming back and applying what I discovered, as if Brazil offered a blue print for Sheffield. Rather it was a matter of listening and constructing ways of learning which arose from the challenges of those I met to  unlock the wisdom and skills to enable understanding and action for justice.

What I saw happening at UTU was born and bred in Yorkshire; it was the product of  reflection on the experience of  living and working in the inner city and allowing the Bible to inform that experience. UTU confirmed what I had learnt in Brazil,. That is the challenge facing theology today, so that intellectual endeavour  can be organically related to the issues facing us, whether that be climate change or the plight of people in a deeply divided society. That means not only that religion and politics must mix, but also that being true to the biblical tradition. It means following in the footsteps of Amos, Isaiah, John the Baptist, Jesus and countless others down the centuries who have understood life by means of the Bible, thereby enabling their contemporaries  to see what made for their peace. Following that it means working, like Paul the Apostle, to create communities of hope in the midst  of a society all too easily tempted to ignore the fact  that the wellbeing of all in society  is crucial to its future.